Six months ago I joined a team working on a new start-up called laZook. It’s an online distributor, providing brands with a single route to many existing eCommerce channels and some that we’re helping to develop from scratch. We handle the listing, fulfilment and payment for these brands’ products.

We have various features at varying levels of maturity. One of those is a “microstore” that provides a drop down checkout on a website. This is in use already on several blogs and magazine sites. It needs more work but, as it stands, it provides a publisher with the choice of thousands of products to sell on their site. They insert a javascript snippet on their page and their site is now eCommerce enabled. For each purchase they receive commission, much like in a traditional affiliate scheme. One advantage here is that the purchaser is not taken off site for the checkout flow.

We’re currently using PayPal for the payment processing, but they don’t seem to have moved with the times very much and do force us into some poor user experience during checkout. As a result we’ll likely be moving to Stripe at some point soon. They have some modern APIs and can offer a lot more control over the experience.

If you want to see the Microstore in action (even if it is a little rough around the edges), check out the Ex Cellar Wine Club blog. Please do give us some feedback on what you think! 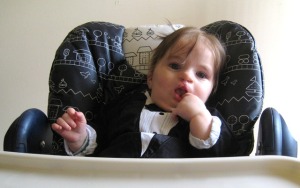 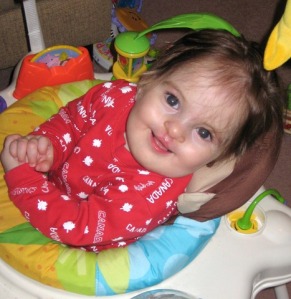 By popular request, here are a couple of pictures of Arthur, for a change! It’s been six weeks since the operation on his upper lip, and it’s healing well. You can still see the scars, and they could be there for up to a year. However, there’s already a large improvement. The next major operation is to give him a haircut. We will get around to that, I promise. (Arthur, if you’re reading this in several years time, I apologise for the length of your fringe!)

In other news he has his first tooth in the unusual position (I am reliably informed) of the top left. He’s being quite brave about it all, but it’s obviously not the most fun a baby can have! Poor chap.

Arthur’s lip surgery is complete and went well. He was released from hospital the day after the operation and a very tired family were quite happy to get home at about 7pm on Friday. He’s recovering well with more smiles than tears, but still on pain relief. I’ll post up a post-op picture once his lip has settled down a bit. Thanks to everyone for their well-wishes, they were very much appreciated.
A quick update – Arthur’s second surgery has been retimed back to its original date of tomorrow, September 17th. He went for the pre-admission clinic today and passed all the tests (which are: Do you have a cold? Are you allergic to anything?) so we’ll be heading in early doors tomorrow. The operation will occur in the morning. He might be out on Friday if all goes swimmingly, but they did keep him in an extra night last time so we’ll just have to see.
Thanks to all who have sent us good wishes. I’ll let you know how it went. 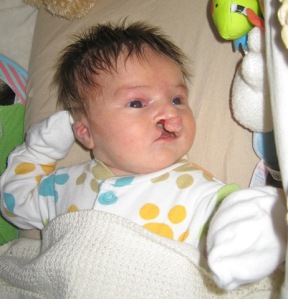 A quick update on Arthur. He’s been home now for just over a week and isn’t requiring a tube to feed, which is good news. He’s gaining weight as expected. We’re now dealing with the normal new born parents’ problem of trying to get enough sleep!
We have an appointment on Monday with the team of people who will be performing lip and palate surgery, orthodontal work, speech and language therapy and hearing corrections. They’ll lay out the timetable for the work on him and we’ll ask questions. I’m going to try and record the meeting on my phone, as the first thing that disappears with sleep deprivation is memory!
After the meeting it’s back to work for me after three weeks off. I’ll leave you with a picture of him in his Moses basket at home, eyes open and no feeding tube in sight.
By the way, thanks everyone for the cards, calls and presents. It means a lot. Thank you cards will be on their way out just as soon as we can teach him to write.

Meet Arthur Albert Gallagher, my son. Born two and a half days ago. He’s had limited exposure to the world so far as he has been kept in the neo natal ward to sort out his feeding.

During Julie’s pregnancy he was diagnosed with a cleft lip and palate. Have a look at www.clapa.com, the Cleft Lip & Palate association, for some great material about the condition (for instance, “one in every 600-700 children in the UK is born with a cleft lip and / or palate”). In Arthur’s case the cleft is bilateral and so the middle part of his upper lip is not pulled into position by the rest of the lip. This is the protrusion under his nose (see the picture below and right). They’ll operate on this when he’s about 3 months old to pull it into position. See these photos for examples of the results.

As you can see, he has a feeding tube taped into position. He can’t form suction due to his cleft palate: There’s no way of creating an air tight seal with a bottle or breast. Usually the tube would go up through the nose, but the combination of cleft lip and palate mean that there’s no separation between nasal passage and the mouth.

The feeding tube is a little irritating for him, and not an ideal feeding mechanism for new parents with no medical background (though it’s not rocket science either). So we’re trying to teach him to use his automatic sucking reaction in combination with us squeezing a bottle of milk to simulate what would happen if his sucking were effective. It seems that getting him feeding more naturally like this is good for his development. And the transition seems to be going well so far!

But enough of the cleft. He’s a much loved little boy with blonde highlights in his hair, an inquisitive gaze (when he’s awake) and of a good weight (8lb 8oz / 3.85kg). He’s brought a lot of joy to Julie and I and to all the grand parents, for whom he’s the first grandchild (by a few months at least).

The main point of this post was to show a couple of photos for those who had been asking. However, as I hadn’t previously mentioned the cleft to everyone I wanted the photos to appear in the context of an explanation. I hope it has interested you a little.

Snowy day in London today. Here’s how our back garden looked as I was debating whether to weather the tube journey. It’s pretty, but the country’s not geared up for it. All the buses are cancelled, as are many train and tube routes. 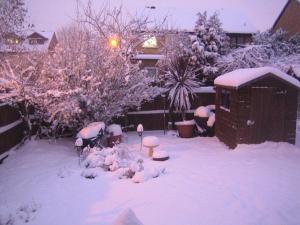 A couple of days ago I got off the bus slightly behind a South African couple. A short distance away, near the entrace to Sainsbury’s, stood an elderly eastern European lady selling the Big Issue. I realised the South African girl must have only just arrived in the UK at the point that she decided the Big Issue was a free handout and attempted to liberate one without breaking her step.  Her boyfriend was in fits of laughter and declared his intent to tell all her friends that she tried to steal off a Big Issue seller.

I was amused, but the old lady less so as she never did make the sale.

We recently had our bathroom stripped bare and refitted. Pink wallpaper became white tiles, the acrylic bath with a hole became a whole enamel bath. That sort of thing.

The company we had in to do the fitting presented us with two faces: Ray, the South African boss (or mere line manager, but I suspect they’re not that huge an operation) and Adam (or ‘Adamski’ as Ray said at one point), a Polish all-rounder in the game of bathroom fitting.

Things were progressing really well, and a nine day job was scheduled to be finished in six and a half. Adam had been very hard working, an amiable and cheery chap, but a little difficult to communicate with. His English was languishing somewhere south of Peter and Jane books. Ray provided telephone and in-person support for the more difficult exchanges.

On the morning of completion and pursuant to the advice of my father, I started the process of snagging in preparation for winding up the operation. One thing I wouldn’t have thought to do without the paternal advice was to check that the bath overflow worked. I filled the bath and kept the taps running. The overflow was working brilliantly; the water was hardly rising past it. With the test concluded, I headed down to the kitchen for breakfast.

As you will have predicted, that’s when I saw the drips from the ceiling. These were followed shortly afterwards by streams of water coming out from the window frames and pooling inside and outside the house.

There was a knock at the door: Adamski had arrived. I rushed to let him in and raced to think of how I could communicate the issue at hand. I hit on one of the few words he knew, "Problem!", and led him through to the kitchen. On seeing the water works he used one of the other words he knew, "Shit!", and raced upstairs to sort it out.

We were lucky that the flow took it into the wall, and it appears (several days after the event) that we’ve suffered no damage from the incident.

So now we have a new bathroom and an embarassed Pole from whom, to my thinking, we might be able to call in a favour in the future.

Just a quick note to inform any interested uninformed; I am married!
It all took place on September the 9th 2006, St. James’ Church in Poole, Dorset. Thanks to everyone who made it and I hope you had a great time. I’ve selected a few photos and added them to an album for your perusal and amusement.
Coming soon will be a few notes about our honeymoon travels to Thailand, Cambodia, Vietnam and… Cornwall.
Loading Comments...